Florida Carry, under the coordination of Region 5 Lead, Kevin Sona, is holding its first Second Amendment march Saturday, April 7th from 9:00am to 3:00pm (walk begins at 11:00am) - details on the flyer below.

This is a permitted event, and Ocala PD is aware to ensure the event goes smoothly. 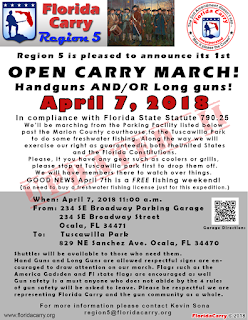 You do not have to be a member of Florida Carry to participate, but you should consider joining for only $25.00 per year if you want to help Florida's best known and most successful grassroots organization fight for your rights.

Open carry of firearms (pistols and long guns) is legal and encouraged with no Florida Concealed Weapons License required if are not prohibited by law to possess firearms and if you are fishing or going to or from fishing. There is freshwater fishing at Tuscawilla Park, and April 7th is a free fishing day, so you do NOT need to have your fishing license with you, but have your fishing pole with you if you will be carrying your firearm openly.

With our right to keep and bear arms under increasing assault by disarmament control-freaks bankrolled by billionaire Michael Bloomberg under such organizations as "Moms Demand Action", "Everytown", and others, Florida Carry is becoming more vocal in its push-back against the attacks on our basic human right of self-defense using firearms both for personal protection and as a defense against tyranny.

The assault on our rights is also coming from government, and now it's the People's turn to speak up and protest.

Republican Gov. Rick Scott recently signed SB 7026 into law, a gun-control bill, passed with mainly Republican support, which infringes on the right of 18 to 20 year old adults to purchase a firearm from any source, among other infringements.

Thankfully, an amendment to the bill to ban AR-15 rifles failed. Still whether fast or slow, whether all at once or little-by-little, the gun-control train is chugging along in Florida. And the biggest engine pulling it is the large group of RINOs in the Florida House and Senate, who smile on TV and say they "support the Second Amendment", get elected and re-elected based on their promises to uphold our rights, who then stab us in the back. At least the Democrats are upfront with their desire for tyranny.

One might wonder if the NRA will rightfully give every law-maker (and Gov. Scott) who voted in support of SB 7026 the "F" rating they deserve. At least the NRA has filed a lawsuit challenging the Constitutionality of stripping young adults under 21 of their right to purchase firearms.

Florida used to be called the "Gunshine State". Such terminology probably was never that accurate and less so now to the point that it's laughable to use the pun.

Even before SB 7026 the infringements are:

1. Prohibition to carry firearms openly except in a few situations, while 45 other states afford the liberty of some general form of open carry, whether licensed or not.

2. Florida mandates a training class to get a license to exercise your Second Amendment Rights in public if not fishing, hunting, camping, or going target shooting. Contrast that with 11 states as of 2017 that allowed concealed carry of pistols without a license, along with many other states that allow you to get a license without government mandated training. Perhaps there should be a training class requirement to vote or speak, or to exercise your Fourth Amendment Rights.

3. Florida is one of about six states to forbid licensed carry of handguns in the non-sterile areas of airports, and we know how well "gun-free zones" work, now don't we?

With Florida being flooded with people from all over who don't care about the right to keep and bear arms, it's high time to stand up for those rights if you want to keep them.

Open carry fishing marches are not the only way to peacefully protest, either.

Here's a little secret: There are ways to conceal your pistols, and still legally look like you are carrying. Click here for a few ideas. Ammo magazines are also currently legal to wear uncovered.

And of course, you have the First Amendment to wear shirts and hats stating you are "Lawfully Armed". Wear them at festivals, fairs, concerts, and other public events on public property where you cannot be trespassed merely for being armed.

Let's see if the RINO guardians of tourism dollars (valued over rights) will prefer that to just legalizing normal open carry.
Posted by Phil at 11:26 PM