Folks, Vermont has just done what lawmakers do best. They took another bite out of our liberty by passing a gun control bill headed to Republican Gov. ​​Phil Scott's desk, who promised to sign it.

Republicans and Democrats are both hard at work not letting a "tragedy go to waste" in order to forward their anti-liberty agendas. Granted, most of the tyrants are Democrats, but far more Republicans are tyrants at heart than you might think. They are just better at keeping it a secret until they stab you in the back, like the one below just did. 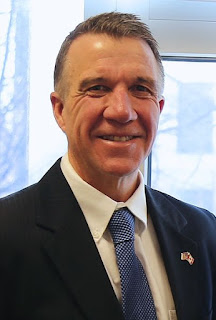 The bill will punish anyone who sells a firearm to anyone under 21, so 18-20 year old adults can kiss their right of self-defense good-bye, unless they have the good fortune of receiving a firearm as a gift.

The bill will limit rifle ammo magazines to 10 rounds (you know, the same 10-round magazines used by the Parkland school shooter), and pistol ammo magazines will be limited to 15 rounds.

Seems like this is not about safety at all, but an incremental stripping of our rights. If they really believed magazine capacity saved lives, they'd at least put the limit at no more than 3 rounds, wouldn't they? After all, you don't need more than 3 shots to kill a deer, right? And we all just know that the Second Amendment is about deer or duck hunting!

Vermont politicians must be happy with mass shootings that take only up to 17 lives, because they didn't do one thing to reduce rifle magazine capacity below the magic number of 10 that Cruz used to kill his victims with. I suppose they are just guarding against those mass shootings that take more than 17 lives by banning rifle magazines with more than a 10 round capacity. Note my sarcasm here?

Does Gov. Scott really believe that criminals will turn in their "high capacity" magazines"? There's only hundreds of MILLIONS of them in circulation in our country, and with replacing worn out springs every several years, along with a little cleaning once in a while, they will last at least 100 years.

Even if they were magically all gone, they are not difficult to make. Just take an existing magazine, cut it, weld in an extension, and install a longer spring. No big deal. They are not going away.

I believe a much better way they are not going away is for good citizens to simply tell Gov. Scott to shove it where the sun don't shine and to just keep their peacefully owned property. And if Gov. Scott wants to take them by force, he can bring his own guns and try it. Molon Labe!

"I know why they are disappointed. But I think at the end of the day, they'll soon learn that what we have proposed, what's being passed at this time, doesn't intrude upon the 2nd Amendment. It doesn't take away guns, and I believe that we will get accustomed to the new normal, which is trying to address this underlying violence that we are seeing across the nation." - Gov. Phil Scott

Oh, excuse me. It's just that we need to "learn" to accept the "new normal". Of what? Of watching our right to keep and bear arms be diminished bite by hungry bite? So the bill doesn't confiscate guns? Oh, thank you, Mr. Highness Governor! We are so fortunate for your magnanimous offer not to come shoot us and take our guns!

But you know, our guns do run on ammo magazines, and if it please the crown, sir, we'd like to not have to reload as often when we need to use our guns to protect ourselves and our loved ones from multiple criminals breaking into our homes, or from tyrants that later decide not to stop at magazine bans, but who also enact gun bans.

Tyrants do not stop until their tyranny is satisfied. According to Gov. Scott, the "new normal" is a process of "trying to address". Ask him if he thinks we are at the end of this process. If he is honest, he will tell you, "No". That means they have MORE infringements planned. More bites to take from us. Like piranhas, they will nibble again when they are hungry again. When they think they can get away with it again.

Like the frog in the pot of water, we are gradually being boiled without jumping out as they slowly turn up the temperature, without daring to go too far at once. That has been their plan all along.

See that grin on his face in the photo above? That's the same grin he will have when one of you up there in Vermont gets busted and goes to prison over a small metal and plastic container that holds more rounds of ammo than the government dictates you should be able to have in one. They have plenty of oath-breaker armed enforcers to do it to you, and they will sleep well at night while you are separated from your family, unable to provide for and protect them.

Maybe we can borrow the "March For Our Lives" slogan, "Enough is enough!", and make our own demands of them to get their grubby hands OFF of our freedom. And if they won't...

Losing liberty doesn't always come at once. They nibble a little here and a little there, the tyrannical bastards, knowing if they did it all at once, it would be too much to not wake the sleeping giant that would rise up and lay a proper 1776 on them.

They are getting greedy with that temperature dial, and their maw is aching for a larger bite. Evidence? A retired U.S. Supreme Court Justice recently called for the repeal of the Second Amendment, and a Texas (of all places) candidate for state representative does the same not long afterwards.

If they keep that up, they just might need to quickly make their plane reservations for Canada or Britain.
Posted by Phil at 2:21 AM