Florida: Hiding Your Gun In The Open © 2017 Phillip Evans

"Liberty loving" Republicans in Florida get A+ ratings from the NRA, and talk a good game of supporting our Second Amendment Rights.

But for some reason they can't seem to stomach something so mild as to allow licensed-to-carry citizens to carry their holstered pistols uncovered without facing fines and jail, and a criminal record.

Right now, open carry, campus carry, and airport carry bills are languishing in the Senate Judiciary Committee, supposedly dead for the year, once again, because Republican leadership in the Senate is giving timid RINOs the political cover to avoid taking a public vote on these bills.

Turncoat Republican Senator Anitere Flores so far is not being over-ruled by her boss, Senate President Joe Negron (die-hard "supporter" of the Second Amendment), who has the authority to bring the bills to the floor for a full and honest vote, in spite of the committee. So much for their "support" of liberty. 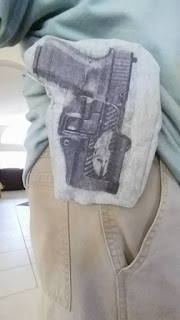 So we are going to protest in a peaceful and open manner to help educate the public that open carry will not be the panic inducer that the antis make it out to be. After all, 45 other states have licensed or unlicensed open carry of handguns. And plenty of Florida tourists live in those states. Plenty of foreign tourists also visit those 45 states in spite of legal open
carry.

If you want to carry openly in Florida, under current law, it is permitted only if fishing, camping, hunting, or shooting, or going to or from those activities.

So the next best thing is to wear a dust cover on your gun hiding it from view, satisfying the concealment requirement of the law, but not hiding the fact you are armed, as a graphic print of a pistol is on the cover leaving no doubt what it is for.

So far, it looks like law-enforcement understands that this product is legal.

From the product's creator:

The "2nd Amendment Dust Cover" has an image on it of a firearm in a holster. This allows those around you to know that you are carrying. This is the prelude to open carry and will hopefully ease any tensions with people when and if open carry is passed in Florida. The cover is created of a cloth material that when used correctly, will cover the firearm completely thus complying with the Florida 790 statute."

Breaking News as of 04/24/2017 - It appears as though Paul's "dust cover" or as one commenter stated, "Cheetos cover" is starting to go viral.

Unfortunately, many who are supposedly pro-gun rights are denigrating the product on a tactical basis or a looks basis.

For those who are, you are MISSING THE POINT. We'd rather not wear these things, and yes, they do look silly. But the fact is, they are a means to an end. They are meant to show tourists and the general public in Florida that we want to carry openly in a normal fashion, but since 1987 that will get us arrested, jailed, and fined.

So at least keep talking about it to help spread the word, and maybe one day we will all have the CHOICE to carry openly or concealed as liberty dictates.
Posted by Phil at 12:27 AM