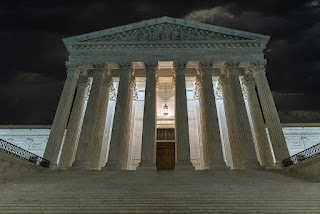 U.S. Supreme Court Building
Photo by Don Sniegowski
The lawsuit was brought because the plaintiffs were denied a license to carry a firearm on the basis that they could not show a "special need", supposedly to consist of a specific threat against their lives. Sometimes needing to walk through a high crime area prone to murders, rapes, robberies, and assaults wasn't good enough for their government overlords.
The "special need" in practice, was having the right connections via being rich, being friends with folks in high places, or both, which they lacked. Believe me, money passed many times under the table (or other favors exchanged) in this government-run racketeering scheme.
The little people didn't even get scraps in New York with regard to their self-defense rights. They paid the hundreds of dollars in application fees just to be laughed at behind their backs while they waited for their big fat "NO, you cannot exercise your right of armed self-defense in public because your life isn't worth it" answer.
Why it even took this long to get such a case to the U.S. Supreme Court is unfathomable, but at least we finally got it.
Don't make the mistake of assuming this was a narrow decision pertaining only to an onerous licensing scheme. Carefully read their reasoning for ruling the way they did, and you will see that it essentially sets a new and higher bar for ANY gun law challenged on constitutional grounds, that being a historical approach favoring the literal text and original application of the Second Amendment.
The two-step right of the people vs. government interests means test has now been abolished with regard to the Second Amendment, at long last.
This means that governments, when challenged in court, must prove that their restrictive laws on the possession and carrying of arms do not violate the Second Amendment.
Unfortunately, leftist courts will keep doing what leftist courts do until other cases make it back up to the U.S. Supreme Court, with whatever makeup it will have then. But at least the low-hanging fruit can be picked in a fairly timely manner, so other infringement states such as Hawaii, New Jersey, California, and others are on notice.
The general bans on carrying a holstered pistol in a visible manner ("open carry") are also ripe for picking.
New York, California, Florida, and Illinois, and the District of Columbia make it a crime to wear your handgun on your hip uncovered when walking down the street, even if you are a licensed carrier. But a historical approach will show that even when the Second Amendment was penned, carrying openly, and without a license, was the norm.
That even the "gunshine" state of Florida will enthusiastically throw you into a steel-barred concrete cell for having the audacity not to hide your exercise of a fundamental right in public is surprising, while Republican Governor Ron DeSantis smiles on TV and says he supports your Second Amendment Rights with an eye for the Presidency.
Gov. DeSantis sure has been taking his time about it if he does. Perhaps this Court's decision will lend him a little backbone to finally publicly call for true "Constitutional Carry" with no license requirement, and with the only off-limits places being jails/prisons, dedicated and guarded mental institutions, and courtrooms in session, which is what New Hampshire has, being the only state that can honestly lay claim to being a real "Constitutional Carry" state. A few others come close, but look at the state mandated off-limits places in each before giving them that moniker.
Florida's state laws banning K-12 school carry along with school district and local and federal law-enforcement's failures added up to a recipe for disaster for Douglas Stoneman High in Parkland, Florida in 2018. The government forbade teachers and staff to be armed, and failed to come to their rescue when they needed it, especially being unarmed, needlessly costing many innocent lives.
Florida now has the Guardian program, with about two thirds of counties participating. School employees that volunteer must take 144 hours of training to qualify to be armed. It's better than nothing, but the numbers of volunteers is likely to be few with that high hurdle to clear.
Unfortunately, it looks like even with this U.S. Supreme Court decision, armed self-defense in K-12 schools will likely remain a third-class right, as the Court gave a wink and nod to weapons bans in "sensitive places", with the only approved "arms" to fight back being books, erasers, chairs, and perhaps even buckets of rocks. But not a large bucket of rocks. No one needs a high-capacity rock bucket magazine.
It looks like now it's up to us citizens to lobby our state legislatures to demand they remove the existing infringements on our God-given right of effective self-defense, free to protect our lives and those of our loved ones wherever we need to be as we go about our peaceful daily business.
We shall see if this decision injects a little calcium into the spines of our Republican state lawmakers. 14 Congressional Republicans certainly weren't affected. They turned coat and voted for Biden/Pelosi's Second Amendment infringements.
Posted by Phil at 4:14 PM