The U.S. Supreme Court ruled in 2005 that law-enforcement have no constitutional duty to protect a person from harm. In light of police taking this to heart, via either fear or incompetence, "gun-free" zones, especially where our most vulnerable are gathered at, are at even more risk of becoming free killing zones. 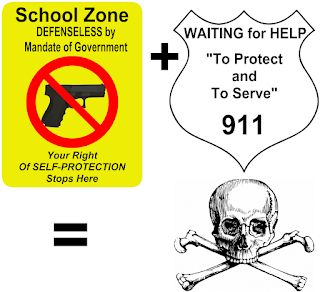 Tragic Math
Image by Author
The K-12 school massacres of Parkland and Uvalde, only four years apart, prove that police failures to protect are REPEATABLE, and mark my words, WILL be repeated again, because police are only human, too.
The constant mantra drilled into them every day by their leadership is the PRIORITY to "go home safe at the end of your shift". So naturally that's what they'll give their best efforts toward.
Can you blame them that much? No police officer wants to be hurt or killed, and society doesn't want that either, but if that's their number one thought each day, then trading in their badge for a different profession might be in order. They SIGNED UP for a duty "To Protect and To Serve", though puzzlingly not legally required to perform that catchy motto.
So here's what it boils down to: The government is NOT obligated to protect you, AND at the same time the law in most states forbids your right to SHOOT BACK at mass murderers in schools because, well, those are special "safe" places where we do not allow weapons, especially firearms.
That adds up to a recipe for disaster.
Let this slowly sink in: Guns are not permitted in school zones by decree of even our grinning "Second Amendment friendly" politicians because these places are "school safety zones". However, criminals somehow manage to bring them in anyway.
Apparently, murderous gunmen are not frightened by words on paper forbidding them to bring their guns into schools.
Parents, teachers, staff, even those that are vetted and supposedly "trusted" by their government, having received a firearms permit or weapons carry license, do not dare carry their guns in schools for self-defense because they fear being jailed if caught.
This is what law-abiding people do, they obey the law - and by doing so are unarmed and helpless when evil strikes. So their only recourse is to wait for others to come save them. Ask Suzanna Hupp, survivor of a 1991 mass shooting at a restaurant.
And how is this plan working out, especially with soft, victim-rich targets like schools?
Orwellian double-speak is strong in the phrase "School Safety Zone", when such words, whether published by lawmakers on paper or printed on a metal sign do little to confer actual safety.
The laws prohibiting armed defense in schools were originally put in place by and large by Democrats, mainly because they are liberty haters, and want people to remain dependent on and at the mercy of government "help". They know better than we little people, we unwashed masses that need to be treated like children who cannot be trusted to protect ourselves.
When Republicans grow a backbone, which appears to be a rarity these days, they repeal such laws. Let's hope they start drinking their calcium fortified milk soon before too many more innocent lives are lost.
While we cannot prevent future police failures, we can demand that the government stops failing us, and allow us free adult citizens the human decency of self-defense wherever we have business to be, even at schools. At the very least for those of us who've obtained our government approved license to carry a firearm in public.
If you agree with me, share this article with your state lawmakers and demand that you be trusted to be armed in schools, that the problem is with criminals and not us law-abiding citizens. Any law which requires us to be defenseless is immoral.
Posted by Phil at 10:56 AM