There is a principle in law which says if you neglect to do something you should have done, and someone is harmed in connection to that, you could be held liable for failing to do your legal responsibilities. There's probably a fancy legal term or phrase for this, but some things come to mind (I really just looked it up), such as: "Nonfeasance", "Dereliction", "Negligence". 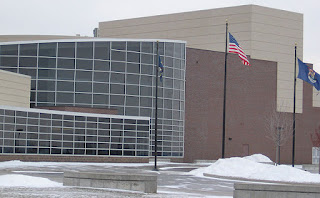 Oxford High School in Michigan
Photo by Adrienne of Oxford
Well well, it seems that 20 students have correctly picked up on this principle, and have launched a Federal lawsuit against the Oxford Community School District for its failures which allegedly enabled the shooting deaths of four teenagers with others injured at the Oxford High School by 15 year old Ethan Crumbley, who was charged as an adult for his Nov. 30th, 2021 crimes.
"The federal lawsuit being filed Friday names the Oxford Community School District, its former superintendent and other officials. It seeks an independent review and policy changes, including increased transparency and communication from the district." - WEST BLOOMFIELD, Michigan (AP) 06/17/2022
Frankly, they should have sued for money also. Hurt pocketbooks have a strange and wonderful way of incentivizing folks to change their ways and start doing what they are supposed to do.
In the lawsuit, they ask for changes to make schools more secure, for more transparency and communication from district officials, and a better effort to keep students out of school that have shown warning signs of wanting to hurt themselves or others.
I haven't seen the text of the lawsuit, so I don't know if one of their demands is for the district to allow volunteer teachers and staff who possess a license to carry, to be armed with a pistol in schools to protect themselves and their students. I doubt it, though. Sheep will still be sheep when it boils down to it. I'd be happy to be corrected on this if I'm wrong.
Transitioning to another Michigan School District, in September of 2019 Addison school officials openly talked about becoming the first school district in Michigan to allow school staff to carry firearms.
Apparently a bunch of folks, including students, parents and community members had spoken up at a public meeting both for and against having guns in schools, and got their attention.
Who knows what became of that, whether they opted to use their authority to arm willing school staff, or just talked about it? These days most officials and politicians just talk, while blood is still being shed and innocent lives are still being lost.
Now here's where you come in. You probably live in a state where carrying a firearm in a school is generally prohibited by law, even for licensed carriers. But many if not most states  have a provision authorizing any school board or district that wants it, to allow teachers and staff who hold a weapons license to be armed in schools for a proper self-defense response when a murdering gunman enters to do evil.
First of all, speak up at school board meetings and demand that they allow for armed defense in schools for all willing and licensed staff. Most state legislative bodies have chickenly passed the buck to these school officials instead of simply decriminalizing the self-defense carry of firearms in K-12 schools by licensed citizens as they should do.
The second thing is to call, email, and meet with your state lawmakers to demand just that, that if licensed citizens can carry a gun in public even in crowded areas filled with adults and children, why can't they carry in K-12 schools as well?
Anyone with a functioning brain knows that "gun-free zones" are free killing zones or victim-rich zones where all you can do is dial 911 and hope that the police get there before too many more are murdered.
And if they do get there, that they do their job and go in immediately. But that didn't work out too well for the victims of the Parkland, Florida and Uvalde, Texas mass shootings where in both cases the police hunkered down outside wondering what to do, as precious time passed and the body count continued to increase.
Those events must have given great pause to folks who trust the government to come save them in time when evil strikes.
Let me spell it out. Those who are being shot at are the ones that have an immediate need to shoot back.
Many state legislatures and general assemblies have a majority of "pro Second Amendment" politicians harping from the hills about how gun-rights friendly they are, and it's true that sometimes they do pass good bills while blocking bad ones (well, sometimes they pass the bad ones, too).
But when it comes to K-12 Carry, most (not all, really) Republicans are spineless cowards.
They don't know how to articulate this common sense liberty of self-protection and are either too lazy or too scared to learn how. Teach them anyway. Be incessant in your demands. If each one of you out there does their part, this ship will be turned around and our schools will be much safer as a result.
I'm only one voice writing these multiple articles advocating for the freedom to keep ourselves safe even in K-12 schools. Add your voice as well, and we will be heard...
I guarantee you this 100%.
Also, I would encourage you all to join state and national gun rights groups, and make your desire for legalized K-12 Carry known to them, that you want them to make it a PRIORITY in lobbying state lawmakers to get it done.
Posted by Phil at 5:02 PM