For those who thought that Justice Clarence Thomas' great opinion in the Bruen decision was the Golden Sword that killed the Hydra, think again. For those not familiar with the mythical story, the Hydra* grew back two heads for each one chopped off, making it hard to kill. Much like the hard to kill infringements on our Second Amendment Rights. 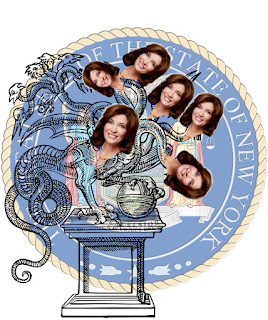 Original Gov. Hochul photo by KC Kratt can be found by clicking here.
As was predicted by more than one person (myself included) in a forum thread at GeorgiaPacking.org, once New York was forced by the U.S. Supreme Court to issue a firearms carry license to all qualifying citizens, New York Democrats quickly moved to devalue that license to the point of making it almost worthless.
That's because the little people ("Let them eat cake!") are not worthy to have a carry license of any real value per the racketeering government officials in New York.
Gambling mobster Timothy Daniel Sullivan, who was a member of the U.S. House of Representatives from 1903 to 1906 pushed the NY Legislature to pass the Sullivan Act in 1911. This law made firearms licenses "may issue", meaning that law-abiding citizens could be denied a license merely at the whim of their Democrat overlords, for failing to show "good cause" or "special need".
These tyrannical NY politicians (both past and present) would make King George of England absolutely giggly.
For over 100 years NY and NYC has had quite the racket going where their corrupt politicians could receive money and other favors from the rich and politically connected, in exchange for the privilege of being armed for their self-protection in public.
This has been especially true for New York City, which does not accept a state carry license, but requires its own issued license.
Now that the racket has been busted by a 6-3 U.S. Supreme Court decision, Gov. Hochul has taken the lead to get her revenge. If the common people think they will ever get what the elites had access to, they better think twice according to her. She gave their state legislature marching orders for a bill to add numerous off-limits places to carry even with a license, making virtually the entire City of New York and much of the state unpractical for carrying a concealed pistol in public.
Even more perverse in the bill is the new signage provision. If you have a carry license, and enter ANY private business, you automatically commit a FELONY unless that business has posted a sign stating that concealed firearms are permitted. You can count on one hand how many businesses would post such a sign.
These Democrats have gone into full idiot mode just because mere citizens dare to desire the right of self-protection when going about their daily business often in high crime areas. "How dare women wish to defend themselves against rapists!", whines female Gov. Hochul in her mind.
To even obtain a license you have to provide not only four references vouching for your moral character, in the new bill now signed into law, you will also have to provide all of your social media handles for the past three years, so that your Facebook and other Internet posts can be scrutinized by these same corrupt Democrats diligently looking for any possible excuse to not issue you a license to carry a firearm in public.
Would my blog article here disqualify me from receiving a NY carry license? Saying "probably" would likely be an understatement. As well as any criticisms of Democrats you've made on social media.
You will also have to provide all the names and contact info of any adults living with you, including your adult children. Talk about a privacy invasion!
Additionally, you will be required to take a 16 hour government approved firearms course, making the expense out of reach for poor New Yorkers who live in areas where they have an even greater need of self-defense from armed criminals. Don't believe me? See the next sentence:
Just to apply for a New York City firearms carry license costs $340!
Many poor New Yorkers are Black citizens. Just like Democrats in the Jim Crow days of the old South, modern Democrats want to keep Blacks unarmed, especially in public.
I suspect Gov. Hochul's new law will have some backfire effect, as the elites there just received a healthy dose of her fangs' poison. Their ability to carry a gun with their license has just been greatly diminished.
Of course, New York will waste millions of dollars of tax-payer money to defend this new law in court, as challenges will soon be filed, if not already, by gun-rights organizations such as the NRA, GOA, and SAF.
You can help too, by joining your state's gun-rights organizations. And always VOTE for true Second Amendment Supporters!
* Obviously, the Hydra I'm talking about is laws that infringe on our rights. I'm not saying that Gov. Hochul is literally a hydra. Her photo is on the hydra image because she is the face of these laws in NY. No advocacy of violence against any politician is stated or implied in my article here.
https://waronguns.com/youve-got-the-teeth-of-the-hydra-upon-you/
Posted by Phil at 5:25 PM