The City of South Fulton, Georgia has a main Facebook page, and each district has its own official government page as well. The evening of August 30th, 2022, Councilwoman Helen Z. Willis blocked me from seeing her District 3 page at: https://www.facebook.com/cosfdistrict3. 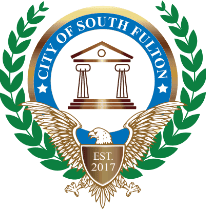 City of South Fulton Seal
Fair Use
My perceived offense? I posted an on-topic and benign comment on the City's new gun ordinance she had sponsored. Although she deleted my comment, I was able to reproduce it entirely almost word for word, as follows:
"There are existing state laws that cover waving about a firearm dangerously, as well as covering pointing a gun at another without justification. The ordinance adds no additional substance to state law.
Also, if Section 2 passed, that is a violation of state preemption, since guns cannot be banned in government buildings (schools and courthouses excepted), unless there is weapons screening at the entrance. The ordinance does not mention screening, and therefore is null and void.
And, the news reporting on handling a gun was stupid, as it is legal in Georgia to carry a firearm in your hand."
That was it. The strongest word I used was "stupid", which was not even directed toward her. This is the news article I had referred to:
https://www.wsbradio.com/news/local/new-law-makes-it-illegal-handle-brandish-guns-city-south-fulton-property/UFLEBVRIPVGYVFV5JVNAJ7A7SI/
If Councilwoman Willis would like to run a Facebook page like it was her own personal page, she should close her government page and start one. Otherwise, she must abide by settled law on the matter and allow not only comments she agrees with but opposing viewpoints as well.
Government officials do not have the authority to infringe on citizens' First Amendment Rights.
It can wind up being expensive for them.
The same evening she blocked me on Facebook, Ms. Willis emailed the City Attorney and copied me as follows:
"Attorney Hyman,
The comment was deleted because it’s was harassing and an attempt to undermine the intent of the ordinance. I will gladly speak with you about this in detail."
As you can see, that was an outright lie. There was nothing harassing in my comment, and as far as an "attempt to undermine" the ordinance, I was merely speaking what I considered to be the facts.
The District 3 Councilwoman's arrogance, violation of oath of office, and violation of my free speech rights could wind up costing the City of South Fulton tax-payers a good chunk of money in attorney's fees and damages.
I have reached out to the Mayor, City Manager, and City Attorney to resolve this without litigation. All I require is that my Facebook account be unlocked on the page, and that my comments will no longer be capriciously deleted.
She did the same to two others that I know of, so this is a pattern with her.
Posted by Phil at 12:11 PM