Confusion, slight of hand, distraction and obfuscation - is this the way the Democrat controlled City of Atlanta operates? It would certainly seem so...

Let's pull back the curtain to see what I'm talking about:

Up until around December 27th, 2017 the Atlanta Police Department's bulletin for the New Year's Eve Peach Drop event at Woodruff Park included "firearms" among the list of prohibited items that would not be allowed into the event. 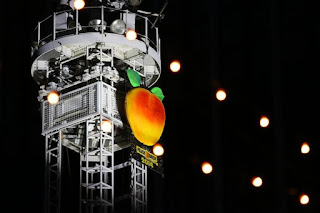 Nedra Rhone/Talk of the Town


After I and some other folks ("gun rights activists") pointed out that state law, [OCGA 16-11-127,(7),(c)] is in disagreement, and that state law trumps any local city ordinance regarding the carrying of weapons...guess what?

Yep, the APD, at the direction of the City REMOVED the word "firearms" from the prohibited list. And since the police enforce the law, this made it publicly look like the police were in agreement to follow state law and allow licensed-to-carry citizens to bring their handguns to the event.

Afterwards however, City of Atlanta Director of Communications, Anne Torres, privately emailed inquiring people that firearms would still not be allowed at the event, even with a license to carry.

The Atlanta Police Department's Facebook page for the event had the police stating:

Deputy Chief Scott Kreher was interviewed in public and here's how that went:

Interviewer: "What about guns? Are people allowed to bring guns?"

Kreher: "Well this is a permitted event by Live Nation, so anytime you have a permit issued by the city you are required to follow all state and local laws, so we expect them to do the same."

Interviewer: "Which means that you can bring guns."

Kreher: "Well that's up to Live Nation. It's their event, and we'll certainly follow whatever guidelines they have in their permit."

Even the interviewer at first thought the police were going to allow guns! He had to ask again just to make sure. Only then did the police FINALLY admit what they had planned ALL ALONG. And that was to NOT allow guns into the event.

Had the interviewer not followed up, the police would NOT have CLARIFIED anything!

And the reason for the firearms ban? Because of Live Nation Entertainment? Really?

Just because the City of Atlanta hires Live Nation to produce the event doesn't give Live Nation legal control of a public city park. Live Nation in that case is merely an agent of the City, and if the City can't ban legally carried firearms, then neither can Live Nation!

The City of Atlanta is currently under a Superior Court Order to not ban weapons in city parks.

If you were denied entrance to the Atlanta Peach Drop because you were legally armed, please get in touch with GeorgiaCarry.org. Click here to get a list of contacts, and let Georgia Carry know about it!

We will then petition a contempt of court action against them. We must hold those arrogant city officials accountable!

You can also email City and APD Officials with open records requests to get all the pertinent information as to who was behind this, what was said to whom about firearms (between the city and the police, and Live Nation), what were the agreements, costs, contracts, etc pertaining to the hiring of Live Nation.

Here's how you can begin your email:

"This is an official Open Records Act Request for copies of any documents, emails, voice recordings, or any other instrument pertaining to..." (and then tell them what you want to know).

They have three business days under state law to respond to you, or they can be prosecuted.

Click here to read part 2 of this article.
Posted by Phil at 4:23 PM