Recently, I submitted an Open Records Act Request to the City of Atlanta in order to obtain any Woodruff Park Peach Drop related documents and contracts. Click here to download the documents.

The City provided me with five pdf files that I have read. What follows is some poignant information in light of the City and Atlanta Police Department's posturing regarding whether or not licensed-to-carry citizens would be allowed to carry their firearms at the event. 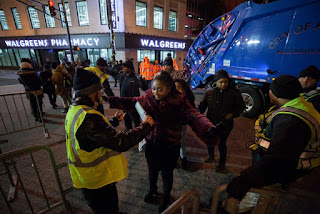 “Reused by permission of The Atlanta Journal-Constitution"

It's interesting that both the City of Atlanta and Live Nation are listed there as a SINGULAR entity.

This same document also states the police as responsible for providing security, even though Sgt. Strozier with the Atlanta Police Department told that police would not be screening attendees for weapons, that only "private security" would be screening for weapons using hand-held metal-detecting wands.

2. From the file: "SIGNED 2017 PEACHDROP PERMIT.pdf" it states that the Peach Drop is a "City-sponsored event", and that "The Event will be executed on the City's behalf, by Live Nation Worldwide, Inc."

So in light of this, why was the Atlanta Police Department telling inquiring folks beforehand that weapons would not be allowed at the event, as Sgt. Strozier informed me when I spoke to him on the phone a couple of days before the event? He told that the police were "told" no weapons would be allowed. Who tells the police to do anything other than the Mayor's Office?

Nothing in any of the provided City documents mentions anything about weapons or firearms, and the Atlanta Police Department's bulletin for the event was edited a couple of days before the event to remove the word "firearms" from the list of prohibited items.

Yet, at least two people reported (see the Peach Drop thread over at Georgia Packing) that after the edit, Anne Torres, the City's Communication's Director replied to inquiring emails that weapons would not be permitted at the event, even if the carriers were licensed to carry.

Why, in light of all the above was the City of Atlanta telling the local news media that weapons would not be allowed at the event?

And had they detected any weapons (yes, the photo above is weapons screening at the event) on anyone with a carry license, would they have been prevented entry or ejected from the event? Perhaps the AJC can find out for us.

Do local Atlanta politicians just make up stuff as they go without regard for state law, or even their own documents and contracts?

Click here to see Chris Joyner's AJC article on how the City of Atlanta is responding to questions about the 2018 Peach Drop.
Posted by Phil at 11:17 PM