There are men and women sitting in jail or prison today whose only "crime" was carrying a weapon (firearm, knife, etc.) for self-defense purposes, but without a government permission slip. And those that have managed to get out have gone through untold hardships to include stress, divorce, loss of home, loss of income, etc., not to mention a criminal record.
Now that we have the U.S. Supreme Court Bruen decision, are we going to soon see a mass exodus to liberty for these political prisoners who are immorally held hostage merely because elite politicians virtue signaled by passing Jim Crow laws requiring citizens to obtain a license to carry a self-defense weapon? 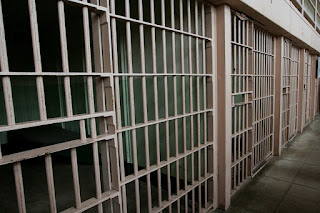 Creative Commons 2.0 Photo of Prison Bars by Jenn Vargas (lightened and sharpened by Author)
Or will this be a one-at-a-time slow wheels of "justice" process with Democrats fighting it tooth and nail every step of the way?
I'm demanding that these prisoners be set free right now with the full exercise of their rights restored! And with sufficient monetary compensation for the time that was stolen from them and their families by government.
Some of them are women who preferred not to be raped, who armed themselves in New York City where for decades it's been practically impossible for non-rich, non-politically connected citizens to obtain a carry license in that City's mafia-type corrupt, Democrat run government.
Some of them are Blacks who carried a gun because they didn't want to get robbed or gunned down on the street. And it was the motive to disarm Blacks that prompted White Democrats to pass a license requirement in the first place.
Practically all of them are regular United States citizens who supposedly had the free exercise of a human right guaranteed by the Second Amendment. But local, state, and federal governments have been playing pretend for too many years that such protection didn't really apply to citizens, that "shall not be infringed" doesn't really mean what it says.
The first post-Bruen dismissal of carrying a firearm without a license charge I know of occurred August 17th. Oddly, there is still a pending charge of obtaining a firearm without a license in that case.
I don't expect our current President to know or care about this topic. But by now every state governor knows about the Bruen decision. And if any of them has any genuine intelligence, they understand that a requirement to obtain a license to exercise our Second Amendment Rights was never the intent of the Founding Fathers, and for at least 100 years after the U.S. Constitution's ratification there was no requirement for such a license. Such is the historical evidence, which is now the test for whether a law touching on the Right to Keep and Bear Arms is constitutional.
Governors should start now by issuing full pardons and restoration of rights for any convictions related to license requirements to possess or carry a firearm or other self-defense weapon if the person was carrying for lawful purposes.
If it's taken 233 years for our High Court to finally get to a decision like Bruen, surely there should be no further delay. Dr. Martin Luther King, Jr. stated in his letter from a Birmingham, Alabama jail that "justice too long delayed is justice denied".
Posted by Phil at 8:35 PM