South Carolina is one of only two Southern States (Florida being the other one) that generally bans open carry of handguns in public. There are narrow exceptions, such as when hunting and fishing, or going to or from. 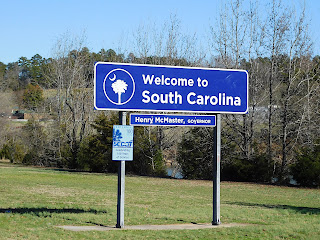 Photo by Jimmy Emerson, DVM
H.3094 has now passed the South Carolina General Assembly, and heads to Gov. Henry McMaster's desk, who has promised to sign it, after which it will become law in 90 days.
Robert Battista, owner of 707 Gun Shop in Horry County doesn't "see the need" for this bill.

He believes the emphasis should be on getting rid of South Carolina's many off-limits places. I applaud him for bringing up off-limits places. Why should I fear jail, just because I want to be able to protect myself and my family, when I know that gun-buster signs and unsecured state and local government buildings won't keep anyone safe?

But having said all that, H.3094 legalizing open carry is a good thing. Giving licensed gun carriers the choice to carry as they wish, whether openly or concealed, is a big step forward regarding liberty.

Why should I be forced, under pain of jail, to hide my good and honorable American right to keep and bear arms in public? Sure, most people will still prefer to conceal, and that's fine. But let's agree to let free adults choose how they prefer to carry, okay?

I'm clumsy. My old hands and fingers don't work as well as they used to. If I have to fiddle with my clothing, even for a small amount of time to get to my gun, that time might cost me my life. After all, folks don't need to pull their gun unless it's an emergency, when time is of the essence.

Just knowing this gives a certain amount of consternation which disappears if I'm carrying openly. And in any deadly encounter, lack of 100% confidence in your physical abilities is not an asset.

Besides that, open carry deters a large portion of criminals who seek out easy targets. The claim that those openly carrying get targeted and shot first is a myth. Open carry is legal in 45 states (30 with no license requirement), so if this was a reality we'd know it by now.

If you like, point Mr. Battista to this article. Perhaps he can be persuaded to join us in celebrating this hard fought and won victory. He's already headed a far piece towards our way by advocating for more carry places.

Interested in fighting for your rights? Then join South Carolina Carry. This Georgia boy did.

I'm also a member of Florida Carry, where the fight to legalize open carry is still ongoing.