Florida Carry is the premier statewide organization dedicated to fighting for our Second Amendment Rights in the Sunshine State. One premise it was founded on is that open carry of firearms is a protected Second Amendment Right.
Why is this an issue in Florida? In 1987 Florida became a "shall issue" state for folks applying for a license to carry. However, Janet Reno (then Assistant State Attorney for Dade County) lobbied the state legislature to ban open carry. Neither the NRA nor the Republican politicians stood up to it as they were promised a revisit of open carry in a future session. They foolishly swallowed that lie -  hook, line, and sinker. 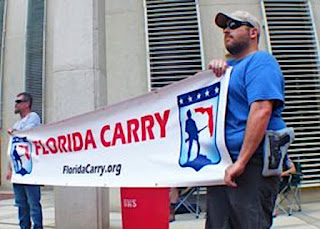 Kevin Sona (right, Director with Florida Carry wearing a Silent Protest Cover) and Steven Jenkins, Florida Carry Region 11 Lead. Used with permission.
Open carry, whether licensed or unlicensed is legal in 45 states. Yes, I know most people prefer concealed carry, but every patriot must agree that getting put behind bars for letting your holstered firearm be visible to the public is an evil that must be done away with.
Florida, sadly, is not among those 45 states. The “gun rights friendly” Republican politicians there are content to let you be cuffed, stuffed in a patrol car, and probed in all your orifices in jail for not putting a piece of cloth over your gun to hide it from tender eyes, even if you are licensed to carry.
Presumably, this is justified under protecting tourism dollars. Even if that argument held weight, it’s still an outrageous violation against the rights of free American citizens. Liberty was not purchased with dollars, but with the red blood of patriots.
No amount of money is worth abusing American citizens and placing them behind bars like animals separated from their families.
What of the 45 states where tourism is not hurting from legalized open carry? Hmmm?
My home state of Georgia has plenty of tourists. Case in point, Stone Mountain Park. At least four or five times when the park was packed with tourists from all over the world during the July 4th Celebration, I openly carried my holstered pistol among the crowd, with no one batting an eye as far as I could tell. We all got along splendidly, even conversing at times with folks nearby who clearly saw my pistol. It was no big deal. I was not the only one carrying a gun openly, either.
Contrary to the hype of many politicians, the public is not as scaredy-cat as they would have you believe. Yes, some hypersensitive folks will flee at the sight of a gun openly carried by a person not wearing an official government uniform, but rights are not just for public servants, they are for us all. And here’s a clue, “We The People” are not servants to anyone.
A "Silent Protest" is now afoot in Florida.
It’s a pistol shaped cloth that drapes over your holstered gun, called a "Glock Sock" by Open Carry Texas members in the days before open carry was legalized in Texas, but now called a "Silent Protest Cover" by Florida Carry.
It hides the sight of the gun itself, so it falls within Florida’s must conceal law. Yes, most folks will guess you are carrying a gun, but since they cannot see what’s underneath it, they cannot be positive it conceals a gun unless you remove the cloth. Hence, you are within the letter of the law, and that’s what legally counts. “Printing” is not illegal under Florida law. Openly carrying spare ammo mags is also not illegal.
This is an ingenious way to use your First Amendment Rights to support your Second Amendment Rights. It's a figurative poke in the eye for hypocrite politicians who mouth support for your carry rights, but who consistently deny them.
Open carry bills have been introduced multiple times in the state legislature but are consistently killed by Republican leadership at the behest of most Republican members. And no Republican Governor has publicly demanded an open carry bill be placed on his desk.
To those who say this is ridiculous, it's even more ridiculous for the government to jail you just for publicly and peacefully exercising a fundamental human right that is guaranteed by the U.S. Constitution.
This Silent Protest is a necessity when politicians who claim to support our rights do the opposite. Stopping bad bills is not enough. We want the infringements removed!
I get that some don't want to open carry, but it should be up to each person how or what they want to carry.
Frankly, I want people to know I'm armed, as most criminals seek out an easy target. Carrying concealed makes you appear to be unarmed, because even in states like Florida most people don't carry a firearm. Even many who possess a Concealed Weapon License rarely carry everyday and everywhere they go.
As for the element of surprise that some use to argue against open carry, you could be surprised by a criminal whether you conceal or not. Also, my visible gun is not the only one I carry. A good holster, such as made by Panther Concealment, and good situational awareness is the fix for most issues that may arise with open carry. Same principle applies for concealed carry.
The bottom line is that we are not peasants. We adults decide the manner in which we prefer to carry our self-defense tools to protect our lives and those of our families.
We adult citizens rightfully resent being treated as children or as criminals by career politicians who have their professional armed security at our taxpayer expense.
We DEMAND the right to keep ourselves safe in the manner we choose, and at no charge to the public.
While it's free to join the Florida Carry group on Facebook, become a paying member if you want to truly help the cause. This Georgia boy is a member.
Call to Action: Send your Florida state representative and senator a picture of you wearing a "Silent Protest Cover" out in public. Also send them YouTube links of you wearing them in public. Let them know that the open carry ban does not silence you, that actions speak louder than words!
Announcement: Be sure to attend the Florida Carry 4th Annual Guest Speaker Event, Saturday March 20th, 2021 at Runaway Campers 7700 SE 129 Pl, Summerfield, FL 34491.
Posted by Phil at 1:38 PM