Doug Richards with 11Alive ran a story on Georgia Carry's challenge to the Atlanta Falcons gun ban at Mercedes-Benz Stadium. 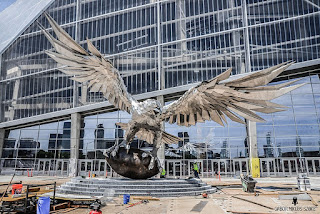 
The response of the Falcons was:

“Mercedes-Benz Stadium will continue to operate in compliance with the laws of the State of Georgia and ban weapons from entering the premises,” a spokeswoman told 11Alive news.

Apparently billionaire Falcons owner Arthur Blank believes himself to be above following state law. Let's see how long he can keep up his defiance until he loses as badly as the Falcons have been.

"The Georgia Supreme Court sent the Botanical Garden case back to a lower court for clarification. If Georgia Carry prevails again – the Falcons may need to lawyer up."

Folks, that's not quite correct, but I understand how he could have gotten mixed up a bit. This is a story with a lot of moving parts. Allow me to detangle:

The lower court case he mentioned is merely to rule on what type of lease the Atlanta Botanical Garden has.

We ALREADY know what type of lease the Atlanta Falcons has, it's a "usufruct" (actually that's clearly spelled out in the lease itself), and the Georgia Supreme Court has made a FINAL decision binding to ALL other courts that a lessee with a usufruct type lease of publicly owned property may NOT exclude lawful carriers of weapons.

It's a done deal, it's now settled and established law.

Here's what 11Alive should be asking:

Will the GWCCA compel the Falcons to follow state law?

Will Attorney General Chris Carr publicly weigh in on this?

How much longer do Georgia citizens need to wait before their lawful right of self-defense on public property under state law is finally recognized?

Isn't a Georgia Supreme Court ruling enough to settle this matter?
Posted by Phil at 12:22 AM