We may never know how many crimes have been deterred by good guys carrying their holstered pistols in plain view, since criminals don't normally report aborted crimes.

The practice of open carry, sometimes abbreviated as OC'ing, is done by only a small percentage of weapons carriers, as most good guys prefer to conceal their weapons. 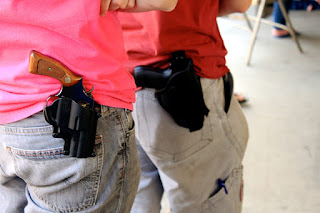 I have nothing against anyone who prefers to carry concealed. Carry as you wish. Live and let live. The point is to carry and be ready to exercise your human right to not be a victim.

Whoever said that the best way to exercise your right to not be a victim, is to whip out a cell phone and call someone else with a gun is a complete fool. Police can't be everywhere, and real adult men and women understand that one does not delegate the safety of one's life and those of their loved ones to others.

I support the right of open carry on the principle that I should not be forced to appear to be unarmed. Most criminals prefer easy targets. They don't want to work hard for their spoils. Ninety-nine point nine times out of a hundred they will choose someone that appears to be unarmed.

I want to clearly appear to be armed.

I'd rather deter the crime in the first place with my openly carried firearm than be forced to draw from concealment and shoot my armed attacker.

Here are some real life incidents that involved good guys carrying openly who deterred crimes and in one case saved lives after the crime was in progress:

Bank robbery deterred by an open carrier of a holstered pistol: http://www2.vcdl.org/webapps/vcdl/vadetail.html?RECID=1022854

Store robbery deterred by an open carrier of a holstered pistol: http://forum.pafoa.org/showthread.php?t=147404

Open carrier able to draw quickly to shoot robber that had shot the store owner:
http://forum.opencarry.org/forums/showthread.php?60072-Virginia-open-carrier-self-defense-incident-shows-open-carry-can-have-tactical-advantages

South Carolina and Florida will put citizens in jail for carrying a visibly holstered pistol, even those who are licensed to carry. So much for liberty in those states. I suppose when their citizens get tired of the infringement of their Second Amendment Rights, they'll put a stop to it by throwing their lip-service to freedom politicians out of office and electing those that truly honor the U.S. Constitution.
Posted by Phil at 5:52 AM