Well, according to at least six astute Democrat ladies of the Georgia General Assembly House, they do.

Their names and district numbers are: 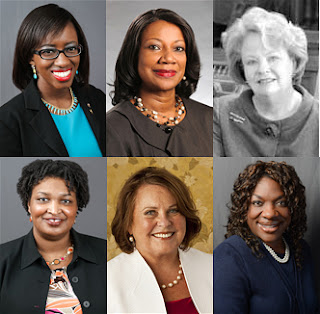 Much of this bill appears to be copied from the Federal "Assault Weapons Ban of 2015-2016" (H.R. 4269) sponsored by 91 Democrats in the U.S. House of Representatives. Or at least it was used as a template. Hillary Clinton is also pushing for this Federal ban.

In an attempt to paint their bill as being "reasonable", they've also included machine guns, and .50 caliber rifles and ammunition, as well as "armor piercing bullets" as being prohibited to possess. To give a little context to help bring us back to reality, I'd like to present this bit of history:

In the time of the 2nd Amendment being added to the U.S. constitution, private ships were often armed with cannons to defend against piracy on the high seas. These were not government weapons, but were equal in capability to government cannons on military vessels. With one shot they could sink a ship and drown the dozens or hundreds on board. Talk about mass killing machines! Yet, there was no call for them to be confiscated.

Just because a firearm is of a large caliber (and .50cal is a whole lot smaller than a cannon) does not make it more likely to be used for evil purposes. There is actually a small percentage of gun owners that use .50 cal rifles for sport shooting. And by the way, it is still legal to own your own cannons in Georgia, even in your own back yard! Even without a weapons license! Oh the shock and horror these Democrat Representatives must have upon learning that!

If multiple bad guys are breaking into your home, are you going to remove some of the bullets from your gun's magazine because 10 is the magic number, and any more than that is prohibited just because your politicians say so? Will they be there with their guns to help save you?

And as for "armor piercing bullets", common lead copper-jacketed .223 cal, .270 cal, .30-06 cal, and other rifle rounds in use for years for hunting game animals can easily pierce the best bullet-resistant vests that are designed to stop pistol rounds. Yet, this law does not address these at all. So I suppose not all "armor piercing bullets" are eyed for banishment after all, huh? If bullets capable of piercing vests which are commonly worn by police officers are a safety problem in Georgia, then all of them would be banned, correct?

But not even police officers are calling for these regular, common rifle rounds to be banned. I wonder why? Perhaps because it is not a problem in our state, and because even if criminals did sometimes use them against police officers, that cannot be used as justification for banning their possession and use by non-criminals. If that sort of justification was used for anything else, most everything would make us felons. You couldn't own knives, scissors, baseball bats, rope, poison, or even cars, etc...

Actually, criminals - especially terrorists, sometimes wear bullet-resistant armor. If they break into my house or try to shoot up a public place I happen to be at, I'd want to be able to stop them.

Should you happen to own any of the prohibited items listed in HB 731, the only ways to avoid spending years in prison according to this law is to destroy your property yourself or somehow make it inoperable, or give it to the police to destroy for you - with no monetary compensation at all. How nice of these politicians to take your property off your hands tax free! Don't you feel your burdens being lightened already? At least the Australian government gave some money to their citizens when forcibly taking their property.

Sweet On The Outside

I'm sure if you met one of these women in person, they'd seem to be absolutely personable and likable. You'd never know behind their smiles that they have a desire for you to be locked in a cage like an animal behind steel bars, separated from your family, with no means to support them. Oh, but once you lose your house, the government will give your spouse and children food stamps. All while you get to be beaten, raped, or murdered by your fellow inmates, hardened criminals that actually belong in prison. Sweetness abounds with these ladies doesn't it?

Oh, but they would protest, "Just obey the confiscation law, and you can avoid the consequences. After all, this is for your own good. You cannot be trusted to own certain mechanical items because you might accidentally hurt yourself or others. Or you might snap and do it on purpose. You see, mere citizens cannot really be trusted by the government. Government must use the threat of force to make you comply."

I was being a bit tongue-in-cheek with their imagined reply above, since they would never be as direct and transparent with their answer.

Something Else On The Inside

These sweet looking and talking Democrat women who sponsored HB 731 don't really hate the firearms and ammunition magazines they are trying to ban. They only hate for you to own them. They are quite happy for government to possess them. They are quite happy for agents of the government to possess and use them against you, and to have them to take away your property and liberty at the barrel end of a gun.

They are willing to send local police officers and other government agents to your home and have their blood and the blood of citizens be shed in the enforcement of a law that is a clear infringement of the 2nd Amendment Right to Keep and Bear Arms, just so they can score political points.

For this reason, they are not sweet at all. They are despisers of liberty and a free people. They desire to enslave you to their wishes. Like all dictators that came before them, they desire to disarm you bit by bit if they can't do it all at once. This goes to the heart of why we have the 2nd Amendment in the first place, to guard against tyranny - whether foreign or domestic.

However, they are lawfully elected representatives of our great state of Georgia, and regardless of how much we may disagree with them, they deserve our respect and courtesy. Any correspondence with them should reflect that. After all, we responsible gun owners are gentleman and gentle-ladies.

We are not trying to put them in prison.

The author is a self-defense rights advocate and member of the NRA and GeorgiaCarry.org.
Posted by Phil at 11:57 PM