As the debate in Georgia about guns in publicly owned stadiums heats up, our lawmakers in the General Assembly under the Gold Dome in the State Capitol Building will have some decisions to make. 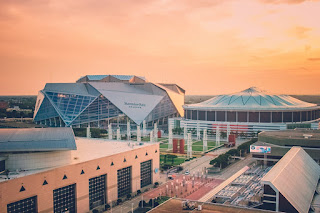 Free to use photo

Here's a little seven-point help for some of our Representative and Senator friends that may be weak in the knees on this:

1. Licensed citizen firearm carriers are 6-times more law-abiding than law-enforcement according to 20 years of recorded crimes:


In summary CCW permit holders are convicted of crimes at less than a sixth of that for police officers.

2. Most police officers are law-abiding, and so off-duty officers and deputies should be allowed to carry at Mercedes-Benz Stadium. Currently, the Atlanta Falcons does not allow them to be armed at games or any other events held there.

There's never enough police around when you need one in an emergency, and this will help to bridge that gap.
3. This has already been the law on the books for five years (HB 60 in 2014), and no one is above the law, even large sports teams.
4. None of the predicted "blood in the streets" or "wild, wild west" came true when being able to drink alcoholic beverages and carry guns in restaurants and bars became legal years ago.
And no drunken shootouts by licensed carriers has happened in other crowded venues we currently carry at, like at Stone Mountain Park during their large events such as their July 4th Fireworks Celebration.
5. Guns left in cars can be stolen and used to hurt innocent people.
6. Guns left at home leave people open to dangers from criminals while traveling to and from stadium games and events, not to mention leaving them defenseless in downtown Atlanta where crime is high, and while walking to and from their vehicles in the parking lot.

7. Multiple "rowdy fans" have been known to gang up on innocent husbands and dads and proceeded to beat and kick their heads into  a bloody pulp. Had those victims been armed, they might have saved themselves from the trouble of some permanent brain damage.

In short, guns in stadiums carried by law-abiding, licensed citizens and off-duty law-enforcement will make for a much more polite and civil environment.

Terrorists will also think twice about hitting a target that might not be as victim-rich as it once was.