Were the Governor to issue the order to suspend enforcement, it would allow citizens who qualify for a weapons license, to legally carry their pistols for protection as if they possessed a license. 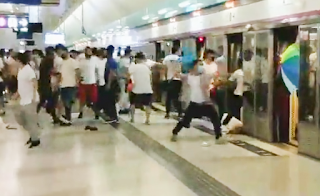 The reason for this request is that probate courts in Georgia have stopped processing weapons carry licenses (new or renewals), and are not even accepting applications, due to Georgia Supreme Court Chief Justice Harold Melton's order to shut down "non-essential" court services, statewide.

I suppose not being able to get a license to carry a self-defense firearm is not "essential", until you're face to face with a deadly threat in a public place, and wish you had been carrying. But we're only talking about the basic human right to keep yourself from not being maimed or killed by violent thieves, mobs of thugs (like ones in the photo), rapists, and murderers. Right?

It wouldn't quite be "Constitutional Carry", since all off-limits locations would still be in place, but at least it would be permit-less carry for those who have applied for but not yet received their license, or those who would like to apply now but cannot.

The spread of the Corona Virus has made these uncertain times, and many folks who have procrastinated to obtain a firearm or carry license are now regretting that decision. Some anti-gun people have changed their minds over this, and are now buying firearms for personal protection.

Tyrant turds like Samuel Theodore Liccardo, Mayor of San Jose, California, has shut down all the city's gun stores. He has his armed detail, so to hell with the citizens needing protection, is his elitist attitude.

On the flip-side, Gov. Kemp ran for Georgia partly on a platform of strongly supporting the Second Amendment, and signaled or at least hinted that he would also serve as a pro-gun rights Governor. Yet, for both 2019 and 2020, he made no peep about it further, and did not set the agenda for a good gun bill, so none passed.

As was confirmed by three lawmakers, who shall remain nameless, the Governor needs to set the agenda in order for one to pass.

Gov. Kemp, on the other hand in a Jan. 6, 2020 AJC article blamed the lawmakers, complaining that there were not enough votes under the Gold Dome to make his campaign promises come true:

"My commitments are the same. My campaign promises are the same. Nothing has changed. But you have to have a certain amount of votes to be able to get something passed, and people's agendas are different."

With the Governor and the lawmakers pointing fingers at each other, nothing got done. Well, actually plenty got done. Time was spent on frivolous resolutions and recognition for this or that, and bills to tweak and regulate the myriad of red tape out there, but when it came to our safety and furthering our rights, well, that's just politics, you know?  Better luck next time, I suppose.

So with this background information, will he sign the order to allow law-abiding citizens to carry a pistol without a license, at least until this declared state of emergency has passed?

Georgia allows neither without a license, unless you're in a special class, like court clerks who take in our weapons carry license applications.

They have true Constitutional Carry. They carry without a license AND they carry legally in school zones, which are off-limits to us "regular" licensed-to-carry citizens, unless we're picking up or dropping off a student. They also carry in polling places when voting, as well as courthouses that don't have screening, which we peons cannot do. Now is there a school or court that can teach us the fairness of that?

Bottom Line: Will Governor Kemp make nice with freedom loving citizens in these dangerous times? Not to mention he has stated we have a growing criminal gang problem. All the more reason to let people have the ability to defend themselves and their loved ones from harm. The Governor certainly has plenty of armed personnel and resources to keep him and his safe from brutes and violent hordes.
Posted by Phil at 6:59 PM