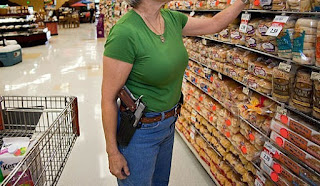 I've been a long-time Walmart shopper, having spent many thousands of dollars with them over the years. Will I still shop there? Yes, when my bride wants to shop there. Probably not so much if I'm shopping freely on my own.

It's not strictly because Walmart has stopped selling most pistol and rifle ammo (or will stop when supplies are sold out - I suppose the bullets already in stock are good bullets that won't hurt innocent people, since the announcement to stop selling them has cleansed the remaining stock of any evil vibes), or even because they have "requested" no one carry a firearm openly except law enforcement.

The reason is because Walmart is actively working behind the scenes to further erode our rights:

2 -  working with Democrats who want to ban "high-capacity" ammo magazines (to Democrats, any magazine that can hold more than 10 rounds is evil. In NY the limit that qualifies a magazine as evil is 8 rounds or more)

3 -  working with Democrats who want to pass "Red Flag" laws where a mere accusation from one person can ruin another person's life, or get literally get them killed by police when they make surprised forced entry into their home

Who else has eagerly jumped on this bandwagon? Kroger, Publix, Aldi, CVS, Walgreens, and others. Granted not all may be making the same anti-rights effort Walmart is; some may just be banning open carry. Even Walmart at this point says legal concealed (out of sight, out of mind, right?) carry is okay. I believe Walgreens and CVS has stated no carry at all unless you're a police officer. So it's a hodge-podge.

Even if these store policies (stores can do what they want, they are private businesses) are cast in real gold ten feet wide and hung from the ceiling they won't stop any evil person bent on entering with weapons and killing people.

These are just feel-good, security theater measures designed to do one thing - to score points with their fellow Democrats and to pacify leftist SJW's who are a small minority in our society. Just because they all have big mouths doesn't equate to there being a lot of them compared to the population in total, even if their noise might make it seem that way.

It's amazing how many useful idiots are on twitter thanking these stores for keeping them safe with these policies. Really?

Bad guys don't follow the law, much less store policy. And good guys who know this and who want to keep themselves and their families safe in public will probably not leave their guns in their vehicles to be stolen from the stores' parking lots when they go inside to shop.

So nothing really has changed, except for the amount of shrill virtue signaling from high-dollar executives who don't have the guts to stand up to the yapping of a small minority of its customer base.

Five years ago, Kroger had guts when it stood up to Moms Demand Action and basically told that Bloomberg funded organization to pipe down. But no longer.

Apparently recent mass shootings, as opposed to other mass shootings back then have caused Kroger to think that peaceful open carriers such as myself are the problem in stores instead of the actual mass murderers.

While store after store bending over is not good news in itself, it does present a great opportunity for other stores to court the business of the real back-bone of our nation, the hard-working, sane people who know rational men don't identify as women and vice-versa, who know that objects (carried openly or concealed) don't commit evil acts, who understand it isn't store policies of disarmament that keeps them safe.

Find those stores who are still run by men and women with common sense and give them your business, and tell everyone about them...often.

So let me know where you all are shopping now.
Posted by Phil at 9:23 PM