Rep. Eric Swalwell (U.S. Representative from California's 15th congressional district) has "boldly" or stupidly (some might say) let the cat out of the bag and directly stated what virtually all Democrats feel but mince words about in various degrees. Stupidly, because it means he has practically nil chance of winning any Presidential Primary. Subtlety is the game of winning politics, Eric. But I digress... 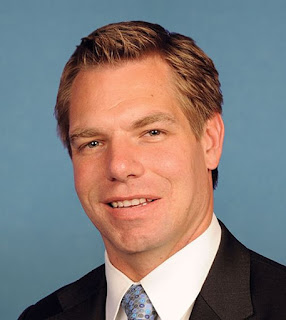 From his own mouth he does want to take your guns away AND put you in jail if you deign to have the gall to keep possession of them. You know, because you want to keep your stuff that you legally bought with your own money. And because you believe it to be your right to be armed with firearms in "common use", and in fact even arms not in "common use" if one takes the Second Amendment (and our God-given right to self-preservation using weapons) to heart.

I'm not talking about blasters that spit out 500 rounds a minute, although if that's what needed to repel tyranny, then yes, I want to have and keep those, too.

I'm not talking about guns that can fire a single round which could send a car fifteen feet in the air like in the movies, either.

What I, and he, are talking about, are semi-automatic rifles, of which the vast majority that are owned in this country are of a small caliber (.22, .223/5.56 for example), that fire a single round per a single pull of the trigger, and which some states have outlawed for deer hunting because... well, because they are NOT POWERFUL enough to humanely take down a 180lb deer.

But in order to make his case, he must greatly exaggerate and say that these are "weapons of war" or "assault weapons". Emotional, pansy blather I say. First of all, if these firearms were weapons of war, our soldiers would be issued them, and they are not. Neither are ANY other modern army in the world issued them. Secondly, "assault" is a verb, not an object.

Do Democrats call pistols "assault weapons", even though many more people are shot and killed with pistols than all long guns combined?

Folks, this is NOT about safety. It's about CONTROL. The Democrats, and to a lesser extent many Republicans simply do not trust a citizenry to be free enough to own firearms.

We armed citizens are a bulwark against their New World Order which worships Communism, abortion, and all manner of depravity. Mark my words, they will not stop at rifles. They already are going after pistol magazines.

New York believes you only need 7 rounds in a pistol magazine to keep you and your family safe, even if a crew of armed thugs burst into your home to terrorize you and your children.

To hell with those busy-bodied politicians. How dare they puke out their nonsense about how much protection we need, when they have all the tax-payer funded guns they need at their beck and call?

Former Vice President Joe Biden went the idiots one better and said all you needed was a double-barreled shotgun, and to then fire it twice into the air making you now holding nothing better than a club.

There are MILLIONS of us who own semi-auto rifles. We safely keep and use them for sport shooting, recreational target shooting, home defense, and also keep them as a guard against tyrants like Swalwell who seek to disarm us at the point of his government guns. How many people are killed per year in this country where these rifles are used by murderers?

Look at this FBI statistic: TWICE as many people per year are murdered with fists and feet than ALL long guns combined (that includes single-shot shotguns, single-shot rifles, and other long guns that can hold no more than 5 or 10 rounds at a time).

If Swalwell gets worked up over the number of deaths due to murderers using rifles, he should instead be doing something about fists and feet, or at least hammers and knives, which also surpass the number of deaths over those caused by evil people that use rifles in their crimes.

In my fantasy world Swalwell and all those of his ilk would be put on trial for conspiring to deny us our Constitutionally Guaranteed Rights, and then appropriately punished, with at least deportation to Cuba, Venezuela, or China - after they are given $50.00 and a single suit of clothes to take with them.

They should be happy and thrive there, as those countries are utopias of citizen disarmament and a government monopoly on violence.
Posted by Phil at 10:08 PM