Enough came out in this second debate that should have undecideds now well decided... for Trump. 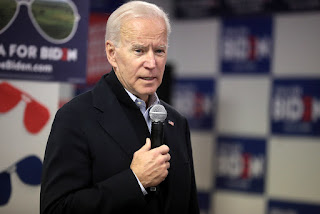 In the Presidential Debate Oct. 22nd, Biden denied ever opposing fracking. President Trump then promised on the spot that he would later show the video. And here it is:

Either Biden has dementia or is a lying sleazeball, or both. Even CNN called Biden a liar:

Along these lines of closing down critical parts of American industry, there was this exchange at the debate:

Trump: "Would you close down the oil industry?"

Biden: "I would transition from the oil industry, yes."

With Biden having his way, millions of well paying jobs would disappear. Not to mention that our military runs on oil, so it would dramatically hurt our national security. You can't fly fighter jets, cargo planes, helicopters, and bombers on windmill, solar, or battery power.

Biden advocating for the end of the oil industry finally leaves no doubt he is in the political bed with AOC and her insane "Green New Deal".

In this same debate Biden also painted the police in general as racists, stating that there is "systemic racism" such that blacks have to be taught special safety tips to keep from getting shot by the police. He said:

“I never had to tell my daughter, if she’s pulled over, make sure she puts — for a traffic stop — put both hands on top of the wheel and don’t reach for the glove box, because someone may shoot you,” he said. “But a Black parent, no matter how wealthy or how poor they are, has to teach their child: When you are walking down the street, don’t have a hoodie on when you go across the street. Making sure that you in fact, if you get pulled over, just ‘Yes sir,' ‘no sir,’ hands on top of the wheel.” (as printed in the NYTimes.com)

Hmmm, I don't know what universe Biden has been living in, but I've generally been taught and read that EVERYONE should have both hands on the wheel when stopped and approached by an officer, with your internal light on if it's at night, and to be polite to the police.
Not to mention when the BLM chant about police: "pigs in a blanket, fry 'em like bacon", was brought up by Trump at the debate, Biden refused to condemn that hateful sentiment against them.
And the last nail in Biden's political coffin:
"Trump brought up allegations involving Joe Biden’s son Hunter, referring to the 'laptop from hell' cited in a New York Post story about the younger Biden’s business dealings in Ukraine.

'What he’s accusing me of is a Russian plant,' Biden said. 'What he’s saying is a bunch of garbage. Nobody believes it except him and his good friend Rudy Giuliani.'

Trump shot back: 'You mean the laptop is now another Russia, Russia, Russia hoax?'" (as printed at Variety.com)
The emails saved on that laptop refer to Biden as "the big man", and shows he is not only entangled in under the table deals with Ukraine but with China as well, to the tune of multiple millions of dollars.
When Biden claimed in the past that he had no knowledge of Hunter's business dealings that was a bald-faced lie.
Even Director of National Intelligence, John Ratcliffe, stated recently that Hunter Biden’s laptop “is not part of some Russian disinformation campaign."

Biden's future is looking more like prison than the White House.