On Sunday, December 29th, 2019, two brave souls lost their lives to a murderous gunman. One other church member, Jack Wilson, took out the killer with a quick head shot from about 25 feet away within 6 seconds of the start of the attack. If you can get the police to you within 6 minutes, you better hope the bad guy runs out of ammo before he gets to you, if you had failed to prepare to defend your own life in the moment that you needed to.

"Moms Demand Action" founder Shannon Watts blamed the shooting on gun laws that allow citizens to carry firearms for protection. She doesn't view the ability to be armed in public as freedom, but rather as a cost. A cost?! 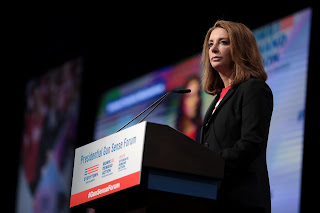 Watts tweeted, "Armed parishioners and 'security teams' in places of worship aren't freedom, they're the cost of gun lobbyists to write our gun laws".

Many folks in that church will be thankful the rest of their lives that free citizens carried their guns that day and for the law that allowed them to. Otherwise, the real cost would have been more lives lost.

What a vile ogre Ms. Watts must be to want to deny them that liberty!

She must be under the delusion that with hundred of millions of firearms in existence, if you outlaw citizens from carrying guns, criminals will not be able to carry one either!

Here's a newsflash Ms. Watts, the murderer in the church broke more that just gun carry laws. Murderers would love for victims to be disarmed, so they can do their raping, robbing, and killing with impunity.

Of course, Ms. Watts' world has to be upside down for that viewpoint to make sense to her. Her and her organization are opposed to we mere citizens carrying firearms in public. Their position is that only law-enforcement should carry in public places. If it were up to them, not only churches, but restaurants, theaters, grocery stores, parks, and other public places would be illegal for citizens to carry guns at.

They want you in jail just for wanting to carry a self-defense tool that can save your life and that of your loved ones!

The facts here don't lie. A non-badged citizen took out an armed killer within seconds of him starting his shooting. Other armed citizens came running to help, with none of the good guys shooting each other or anyone else, as we are told would happen if we let people without badges carry firearms in public.

If you're in Georgia, write to your lawmakers to ask for their support of SB224, which would completely decriminalize carry in places of worship and treat them the same as other private property.

Places of worships' ability to decide who can and can't carry a firearm should never have an automatic weapons penalty for law-abiding citizens (which can cause you to lose your license). The only penalty should be trespass if you don't leave when asked.
Posted by Phil at 12:28 PM